Thank you for your patience while we retrieve your images.

Three homes and a vacant hotel were gutted by a fire overnight Friday in the Ocean Grove section of Neptune Township.
Flames broke out about 5 a.m. at a unit on Seaview Avenue before spreading to an adjacent building. The fire grew fast because of high winds and the close proximity of the homes, officials said.
The five-alarm blaze forced dozens to evacuate. No one was seriously hurt.
Neighbors suspect the fire started inside an abandoned hotel on Seaview Avenue, which used to be known as the Warrington. Some say they've seen vagrants getting into the boarded up building.
The vacant hotel was approved for redevelopment. The cause of this fire is still under investigation. The Red Cross has set up inside St. Paul's Church to assist residents in need of temporary housing. 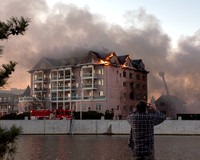 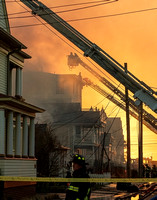